What is Bot Says?

Once you've completed the User Says component of a node, you'll need to define the node's Bot Says section. Bot Says is where a Node stores the replies that are sent in response to the user's message.

This section is also used to configure the Entities that this node should collect from the user.

Tip: If you don't know what an Entity is, it will be helpful to read this Introduction to Entities before you continue.

To get started with adding some Bot Says responses, navigate to a specific node and select the 2nd tab Bot Says.

Once you arrive at the Bot Says page, you'll see the above interface. This interface might differ slightly depending on the state of the node and the responses added to it.

Different channels support different UI elements to be sent as responses. You can view the Channel vs UI Compatibility table here.

Depending on how the node is built, the Bot Says section can have three types of responses - Bot Says, Entity Response, Final Response.

This is the first message that the bot sends out when the node is detected and it doesn't know about any entity on the node.

If you have Entities present on a node, then Entity Response is the response that the bot will send when it doesn't know that Entity's value.

Since Non-Mandatory entities are not compulsory for the node, you don’t need to add a specific response for this entity. And the request to collect the answer can be combined with responses for other Mandatory Entities by using Chat Forms or other HSLs

Once all the entities have been collected, the bot finally replies with the responses from the Final Response section. This is usally a the closing message for that node.

In cases where the node is a Start node or an Intermediate node, the Final Response section is useful to send a response to continue the user to the next part of the flow.

Final Response isn't applicable if the node doesn't have any entities as the Bot Says itself acts like the Final Response.

In case you want to skip this message and directly continue the user's journey in the flow, add {} as the Final Response. Click here to know more about Smart Actions on Bot Says.

This is an interesting section under Bot Says. Sometimes we need to follow up with users as they stop replying, you can achieve that by using Follow up message.

If the user is inactive for a specific interval, then the the bot replies with the Follow Up message. The delay interval for this message can be set using the slider, and can be set between 20 seconds to 20 minutes.

Tip: Use Follow Up messages to collect feedback or increase engagement on your bot.

Note: Follow up message will be sent only if the user has not replied back after reaching that node and the chat is in Bot state.

As explained above, the Response to be sent is chosen from a Top to Down order i.e.

Tip: You can change the Priority of Mandatory entities by reordering them.

Each of the above response (Bot Says, Entity Response, Final Response, and Follow Up Response) are composed of the following:

When showing variants, we now also show the platforms enabled for that particular variant. Clicking on it opens a small tooltip which allows you to add/remove platforms or just select the platforms for your variant here. If you select the platform as WhatsApp, this variant will be sent to user when they are accessing the bot on WhatsApp.

Tip: You can use the HSL builder to simplify creation of complicated responses like Carousel, Images and Buttons.

Tip: You should use Quick Replies to help the user navigate within a flow.

You can use the value collected in the entity inside your bot says to personalize the messages. For example: if you collect the user's name using the person_name entity and you want to use it in the Final Response, you can use the name as shown below -

To use entity value of complex entities like date which can be represented in multiple formats click on the Add Entities dropdown on the top of the bot says textbox and pick the complex entity in the format you want it to be shown in.

You can create personalised responses by using specific tags in the bot response. To view the ProTips, you can follow the steps below.

There are 2 categories of ProTips available:

For ex, if you use "Good %timeofday", the bot will reply back Good Morning/Afternoon/Evening depending on the time of the day.

If you scroll to the bottom, you will see %entitytag_<entity_name>. You can use this tag to use the value of any entity collected in the Bot Flow.

There are 3 smart actions available - 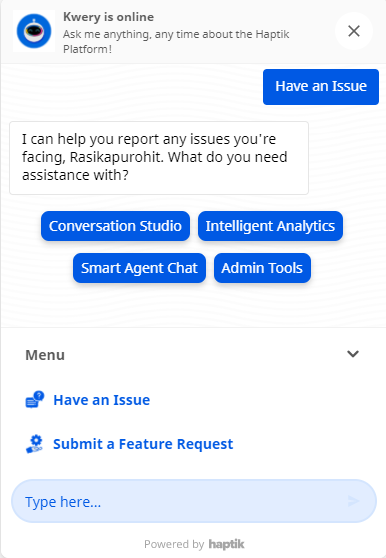 {taskbox} and {feedback} is available only for Web SDK.