User Messages GuidelinesSteps vs Intents vs User MessagesBest practices for building the botDOsDONTsHow to improve the accuracy of Step detection?Sample user messages the utterance

Now that you know what User Messages are, you can create better variations that are added in the User Messages section using the following best practices which aid the Machine Learning algorithm to improve the step detection.

Steps vs Intents vs User Messages 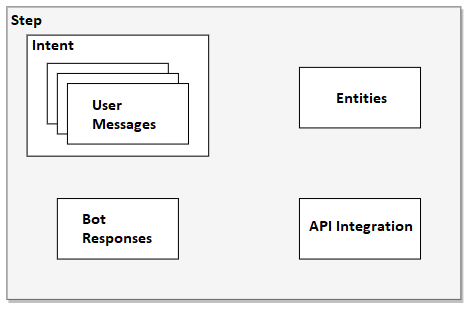 Steps are the interlinked building blocks of a bot. Each step encompasses components such as User messages, Bot Responses, Entities, and API integrations needed to identify the user's intention.

Intent is a box of expressions that mean the same thing from a linguistic perspective but are constructed in different ways. The ‘User Messages’ section is simply a representation of this intent.

User Messages are the user utterance that the assistant needs to interpret the user goal. Add variations of the utterance in the user messages section to make the bot smarter.

For example, if users want to ‘track an order’, the user could say any of the following -

All the above are their own steps in our system, with their corresponding intents which will help users track an order

Create separate steps in the system to handle each of the above-mentioned intents.

Best practices for building the bot

How to improve the accuracy of Step detection?