How to ensure Haptik & Zoho integration is working properly?

If the Haptik and Zoho integration has been completed, agents should be able to take up chats on Zoho which are being redirected from Haptik once a user requests to speak to an agent. All the following scenarios should work seamlessly.

1. Are new chats being assigned to agents?

Whenever the user initiates the chat on the bot, he would at some point require an agent's assistance.

As shown below, when the user requests for chatting with an agent he would receive a response as Eva is forwarding the chat. Here, Eva is the name given to the bot. 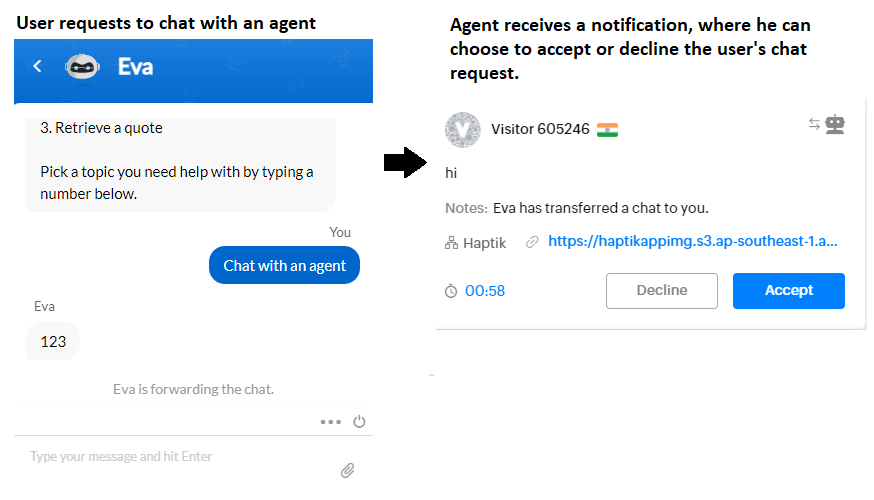 Once the agent accepts the chat request, the same is reflected on the user, as well as the agent's conversation screen. Also, if you notice, the bot name is changed from Eva to the name of the agent who has been handed over the chat, as shown.

Further, the user and agent can continue with their conversation, as shown.

2. Can an agent change his status from online to offline?

Yes, an agent can change his status as per their availability. In order to change the agent's availability status, the agent can simply use the Available/Busy toggle on the agent dashboard, as shown.

3. Can an agent make use of Canned Responses?

Canned Responses are the pre-defined responses that an agent can use in the conversation, in order to save time. The agent can simply type "/" (forward slash) in the message composer area, and the canned responses options will be presented on his dashboard, as shown. 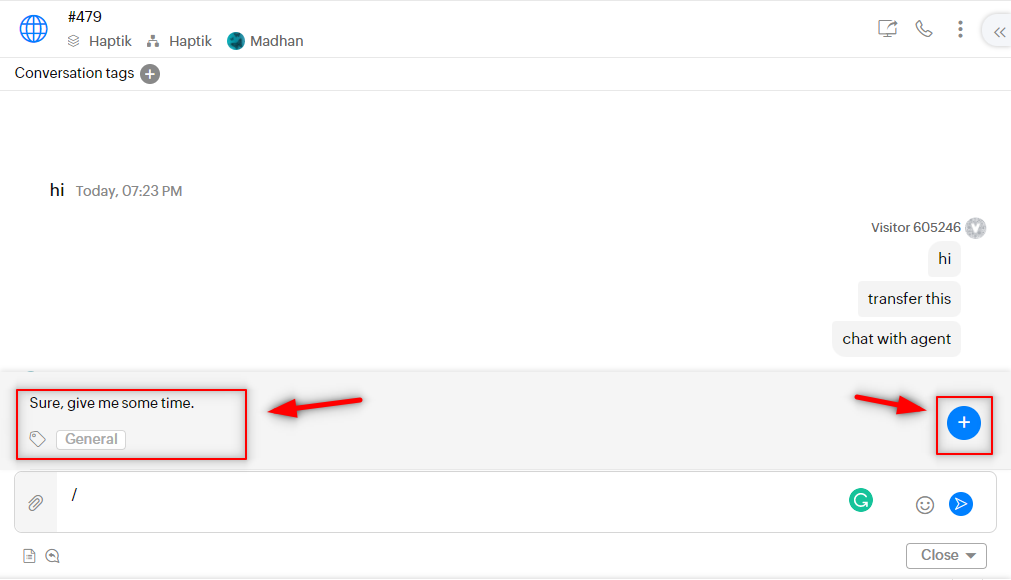 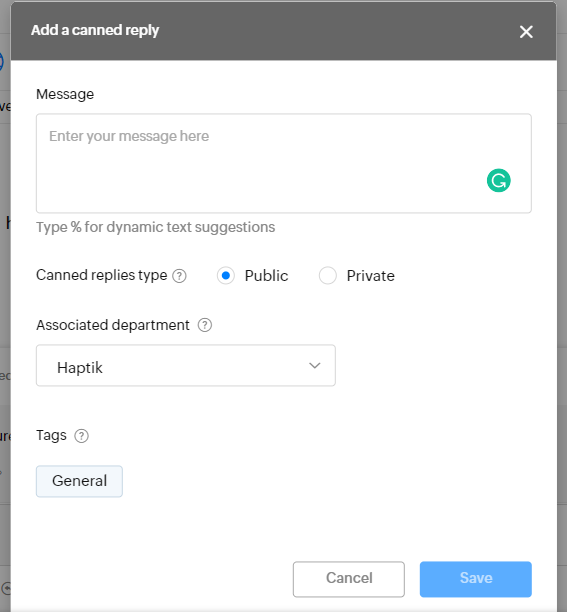 4. Can an agent transfer his chat to another agent?

When an agent is unable to solve the user's query or for any other reason, he can choose to transfer the chat to another agent, by selecting the Assign to button, as shown.

5. How can agents end the chat?

Once the user has got the resolution to his query, the chat comes to an end. Here, either the user or an agent, anyone can choose to end the chat.

For an agent to end the chat, he needs to click on the close button on his dashboard, where he can choose which option to go with while closing the chat with the user, as shown. 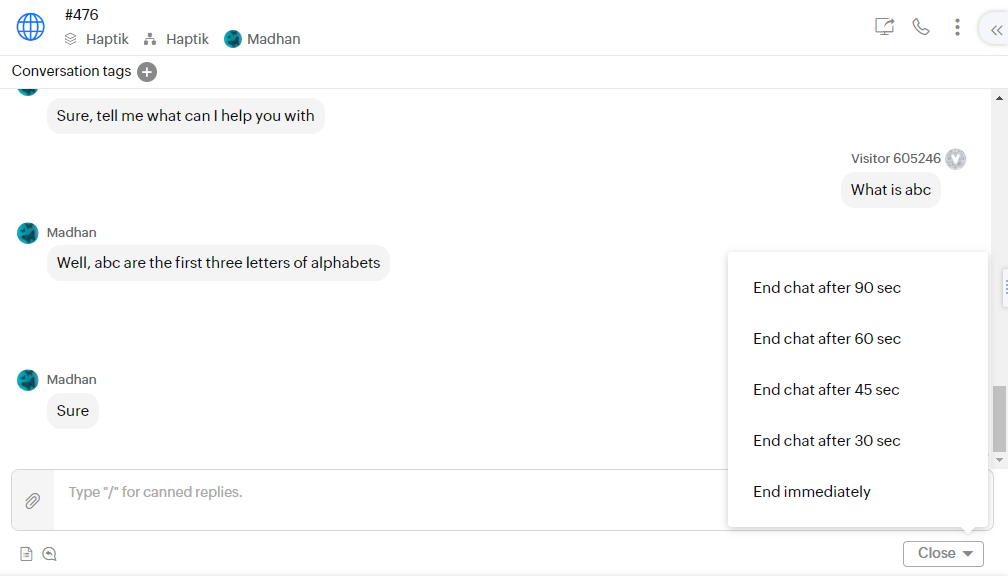 Once the agent has ended the chat with the user, the agent receives the following options on his dashboard, where he can either choose to close the chat, or block the user's IP, so as to avoid the chat from this user in the future.

On the user's conversation screen, he receives the following message, where he is asked to give his feedback, and he can also choose to email the chat transcripts to himself. 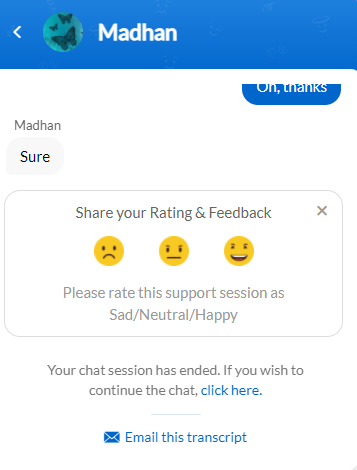 When the user chooses to email the chat transcripts to his email-id, he is asked to fill his email address in the text field, as shown. 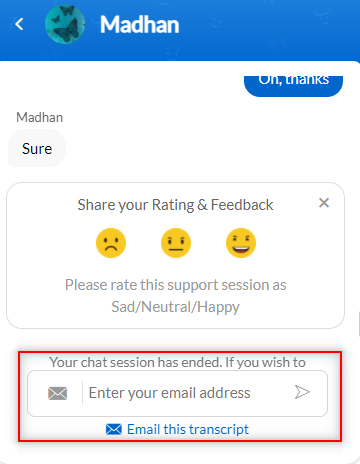 The chat transcript is received in the mail, as shown. 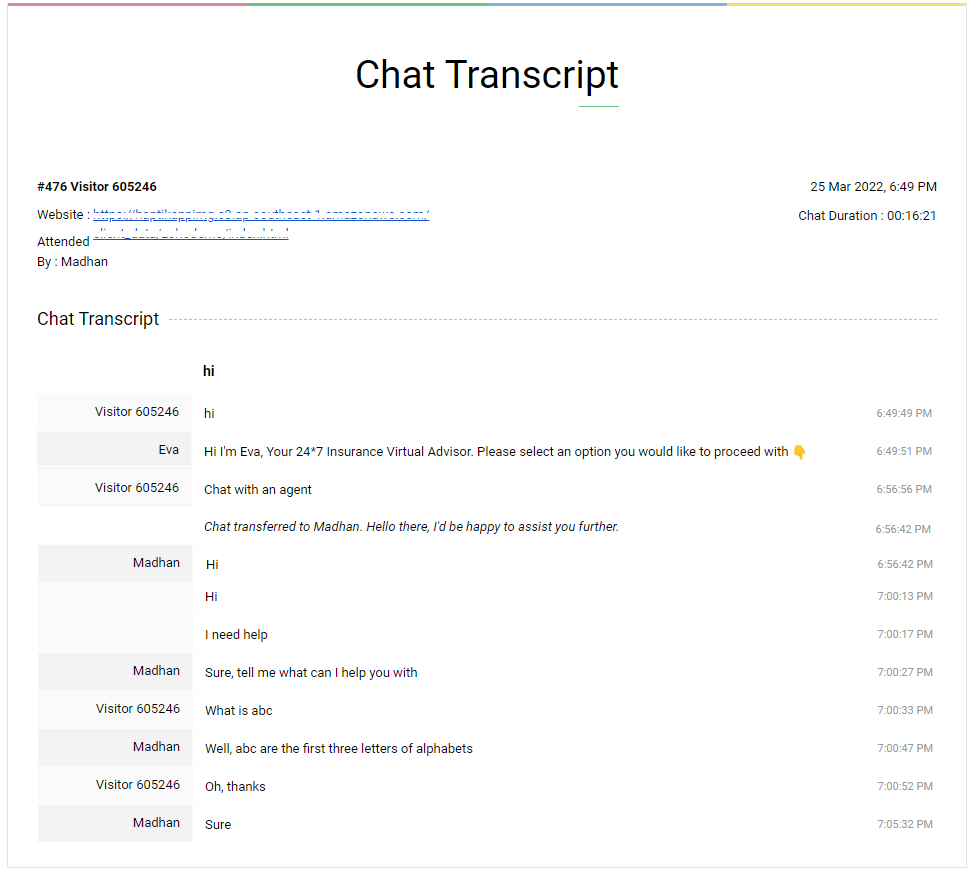 On the other side, when the user ends the chat with the agent, by pressing the icon that resembles the power button, the following response is sent on the user's chat screen and the agent's chat screen. 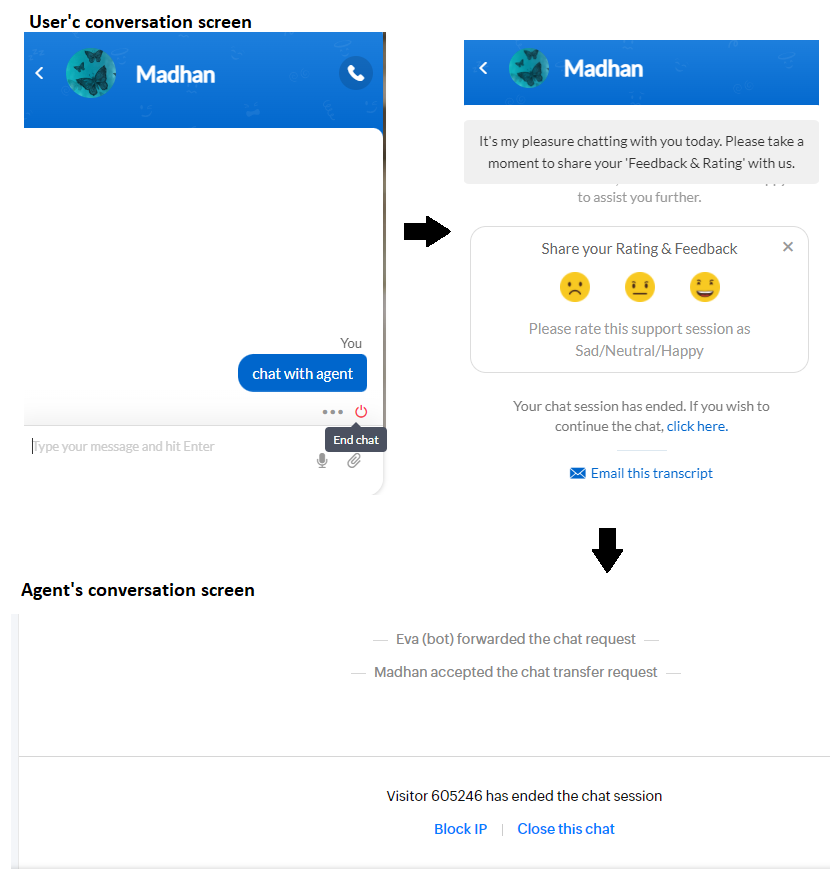 So, if you are able to perform the above, you can rest assured. Your integration is successful. Congratulations!