A Conversation, as we know, is when two individuals interact with each other to share ideas. When a user has a conversation with a chatbot that, too, can be termed a Conversation. In that scenario, the user comes on the bot and asks queries; the bot then responds to the user with an appropriate response.

Now, consider a scenario in which the user has initiated a conversation with the chatbot by sending the first message as "Hi". As shown in the image below, the bot responds to the user's "Hi" message with an appropriate response. 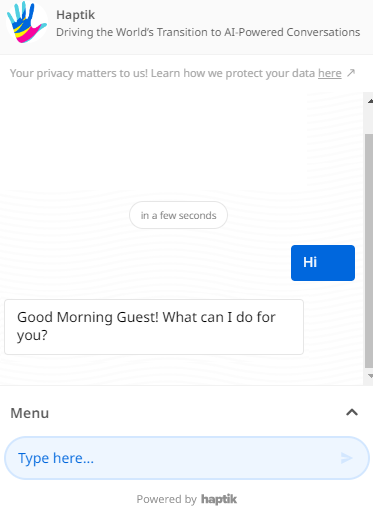 This conversation can go ahead for as long as the user has queries. If the user asks a query for which the bot does not have a response, the user will end the conversation.

How does a conversation end on Haptik?

This means that a conversation on Haptik ends 24 hours after the user sent the first message on the bot. Within these 24 hours, the user can come back to the bot as many times as he wishes to.

What if the user comes back a few minutes before 24 hours? Will the conversation still be marked complete the moment 24 hours pass?