What are WhatsApp Voice Notes?

If you have a bot deployed on the WhatsApp channel, then I am sure you would know all the capabilities that your WhatsApp bot has, be it media exchange or text conversations. But apart from these, there is also one more feature that your users can use while conversing with your bot, and that is the WhatsApp Voice Notes.

What are WhatsApp Voice Notes?

WhatsApp Voice Notes is a way to send messages in audio format. Rather than typing it out, users tap on the mic icon on the composer area of your conversation screen and record your message. Once you release the mic icon, your message will be sent. 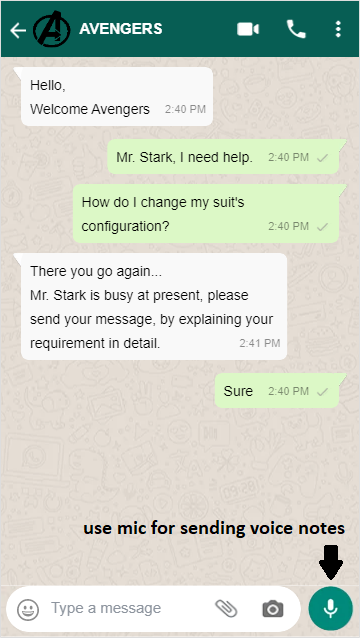 Who can use WhatsApp Voice Notes?

How does this work on the bot?

In this scenario, when the user sends the voice note to the bot, the bot will understand the intent of the query and will send an appropriate response to the user. The bot will respond back in its usual manner as if the user had typed out the same message. Voice Notes thus are just a more convenient way for users to send their queries to the bot. They do not influence the bot’s behavior or response in any way.

We use ASR(Automatic Speech Recognition) technology, wherein the voice note when received from the user is sent to ASR which converts the voice note into a text format.

Voice Notes are just an input mechanism, wherein the users can send their queries in the form of a voice note rather than typing it out in the composer. For the bot, it makes no difference, whether the input was a voice note or a text. It will understand the intent, and respond back in a similar fashion.

Also, this does not change bot building at all. When our pipeline receives a voice note from the user, it simply converts the voice note to text before sending it for further processing. Thus, from the bot's perspective, it simply receives a text message as if the user had typed it out.

What if the voice note sent by the user is not clear?

It might happen that the audio received through a voice note, might be a distorted or unclear one. In this case, the bot will automatically send a response to the user notifying them that it was unable to understand what the user had said in the voice note and it will request the user to send another voice note.

Which languages will the bot be able to understand?

The users can send a voice note in English, Spanish, and many other languages. Our bots will understand these voice messages and will respond back to the users accordingly.

However, do note that we always assume the language the user has spoken in (in the Voice Note) to be the same as the one in which they are currently chatting with the bot. What this means is, whenever the user sends a voice note, the bot will not detect the language automatically. Instead, it will assume that the user is speaking in the same language, as the one currently set for the bot. If the current language of the bot is set to Spanish, then the bot will assume that the user is speaking in Spanish, and it will convert speech to text for extracting the intent, and for providing a response.

Currently, we do not support these three languages for WhatsApp Voice Notes, on our bots.

You can check this link to learn more about the languages supported on WhatsApp Voice Notes.

Why do we not support language auto-detection on Voice notes?

WhatsApp Voice Notes only support audio received from the voice notes, which means the user has used the mic feature on the chat screen.

Other than that, if the user sends an audio file from the gallery or even a video file, it will not be considered as a voice note, and the bot will break.

How to enable this feature on your WhatsApp bot?

In order to enable WhatsApp Voice Notes for your bot, you will have to contact our Support Team at support@haptik.ai, and they will help you in this enablement.