How to check the NPS?

Net Promoter Score (NPS) is a measure that is used to calculate customer loyalty, satisfaction, and enthusiasm with a business that is calculated by asking customers one question: “On a scale from 0 to 10, how likely are you to recommend this product to a friend or colleague?”

The NPS scores help businesses improve upon service, customer support, delivery, and so on for increased customer loyalty.

The NPS tab on the Intelligent Analytics tool provides information about the score given by a user for a bot.

On the NPS screen, you would see Net Promoter Score as well as the Customer Reviews, as you scroll down.

Based on the configuration made by the bot developers, a bot might ask for feedback from the user at the end of a chat. The feedback it captures involves an NPS out of 10 and a free-form text review or comment, which is collected in the form of conversation flow.

Users are asked for an NPS rating in the following way.

This question is configurable. You can read more about this configuration here. Based on this question, the user would give the rating from 0 to 10, and the rating given by the user is used to classify the type of user among Promoters, Passives, and Detractors, as shown.

NPS is represented in 3 colors. Promoters are represented with Green, Passives with Yellow, and Detractors with Red.

If you hover over the NPS block on the screen, you would get a percentage breakdown of. 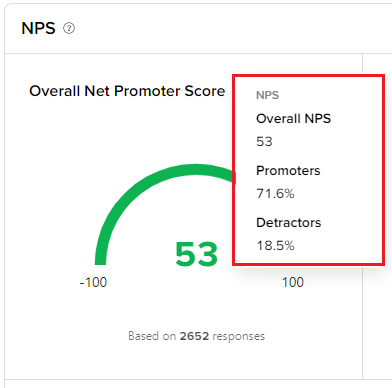 You can also email this NPS Report to your registered Email ID by selecting the Email NPS Report button.

NPS Trend graph showcases NPS on a day-to-day basis. In addition to this, this chart also helps in comparing the NPS between different date ranges.

Top Review Words are a list of the most used words by customers in their reviews for NPS. These words can be filtered specifically for reviews left by Promoters or Passives or Detractors as shown below.

This list is calculated based on the count. The more times the word appears in reviews, the higher it will be on this list. 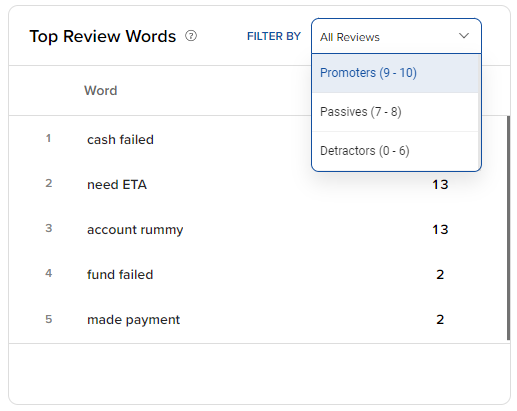 The Customer Review section shows you the feedback that users give at the end of their conversations with the bot.

There is a Filter by option, wherein you can filter the reviews based on Promoters, Passives or Detractors, as shown. 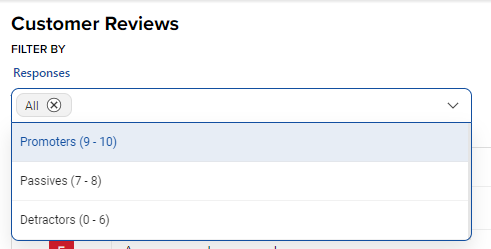 You can remove empty reviews and just want to check conversations where users left some comments, you can do that by using the Empty Reviews toggle as shown below.

Also by clicking on the chat links provided, you can read the entire conversation, to better understand the context of the review. This feature is especially powerful to identify roadblocks and challenges and to identify optimization opportunities based on first-hand customer feedback.

In order to enable NPS on your bot, please create a Support ticket requesting the same with business_via name and it will be done.