What are Smart Funnels on Intelligent Analytics?

For a business that has deployed an IVA solution, it is imperative to know if the IVA is able to help users with a resolution.

Smart Funnel helps us track the effectiveness of the bot by tracking the completion rates and identifying the drop-off points in order to make changes to the bot design or flow to ensure users are getting a resolution. In other words, it indicates the effectiveness of an IVA. This feature will play an important role to enhance user journeys and IVA content. Various metrics like completion rate, drop-off rate, drop-off steps, and funnel hits help us achieve the same.

Steps are interlinked building blocks of an IVA. Each step takes care of one intent coming from the user and responds appropriately.

All these funnels are visible for the duration and business/IVA you have selected on top. Also, you can use the Compare feature to make comparisons for your IVA's performance between the selected duration and previous duration.

A funnel is a question or a request for information by a user. On the Intelligent Analytics tool, it is a stage or a series of stages designed to help users reach the end of the flow that gives them the appropriate answer.

For example, a user interacts with a banking assistant and wants to check their account balance. In this case, the funnel name will be “to check account balance”.

In the above image, consider Step A to Step E is a journey, and it goes through Steps B, C and D.

In short, is the user completing the journey, or is he dropping off at any point. Further sections will explain you more about Funnels.

You can create your own custom funnels depending on which IVA use case you want to track. You can click on + Add New Funnel as shown below.

A funnel has two parts to it. 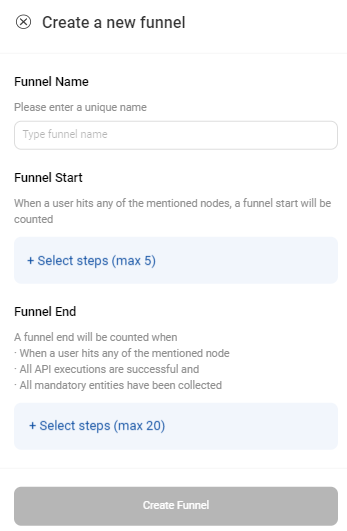 You can specify up to

You can keep adding steps by clicking on the + button. 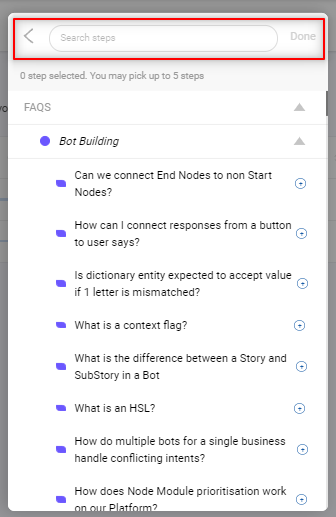 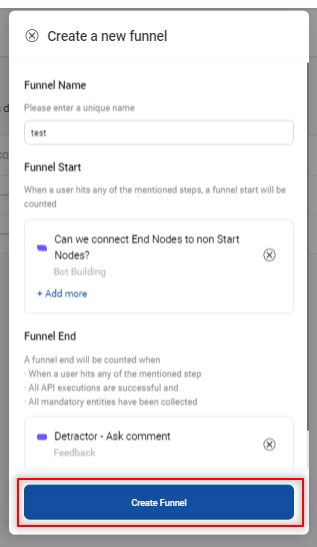 You need to be mindful while creating a new funnel and choosing the start and endpoints of those funnels keeping real-life user messages under consideration as these funnels will help you gauge the effectiveness of the IVA.

For example, if your account balance funnel contains step A, B, C, F, G, H, and you’ve set up a funnel with start points as A, B & endpoints as G, H, here’s how to funnel start and end will be calculated:

This is the no. of times the start point of a funnel has been visited by the user.

Scenario 1: If a user visits the same start point sequentially we do NOT increment the funnel start count

Result: Funnel1 completed (Here repeated counts of A are not counted as new funnel start)

Scenario 2: If a user visits the same start point twice but not sequentially we increment the funnel start count

By default, you will see the funnel with the highest Funnel Hits on top. This is done in order to quickly check the completion rate of the most visited funnel.

If required, you can change the order of other fields and sort it as per your requirement.

To understand why a funnel was not completed, it’s important to know points at which the users are abandoning, restarting, or diverting to a different flow. Understanding of WHY the funnel is not reaching its completion can be found in the drop-off section. The insights on messages shared between the IVA and the user along with the Drop Off Steps can help tweak the conversation design and flow to optimize for better results.

Drop Off is to find out, at which step did the user leave the conversation. You can analyze the conversation and understand what might have gone wrong. Accordingly, you can make the changes to the Steps to reduce these Drop Offs.

How are Drop-Offs calculated?

A user could abandon a conversation due to any of the below reasons. The last visited step is marked as the drop-off step under all of these scenarios: 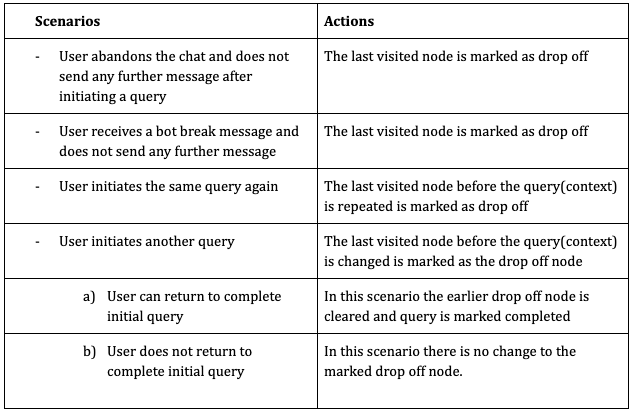 Below are some scenarios which explain the drop-off in more detail.

When any funnel definition is changed, the drop-offs for all other funnels will need to be recalculated.

To check the drop-off points for a funnel, you can click on the icon as shown below

A screen would open on RHS. This screen will have all details of a drop-off with the following 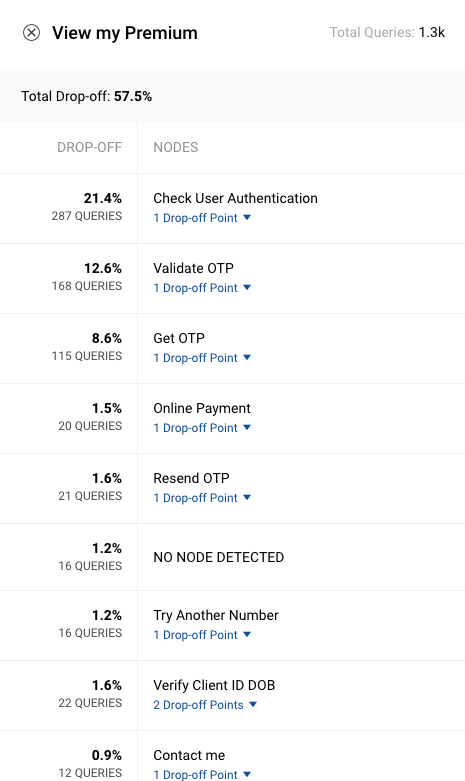 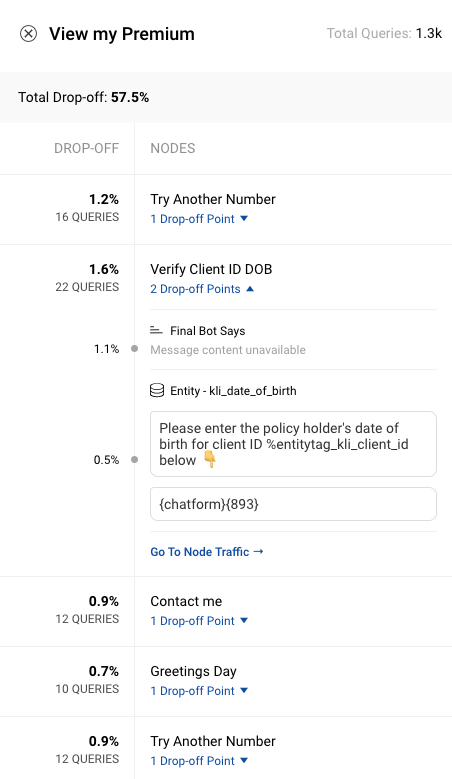 We do not show type of steps under Drop Off Point

No Step Detected is shown in the following conditions 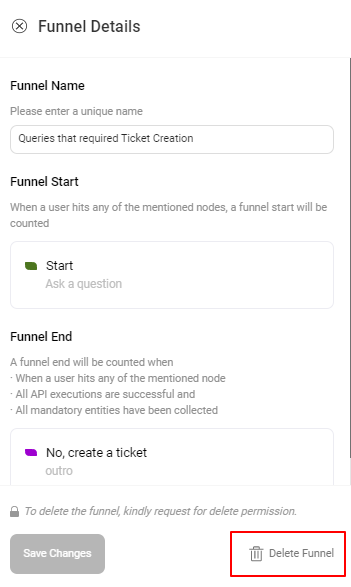 We have separate permission for deleting a funnel so that access to delete funnels can be given to the required members of a team.

You will be able to download the Funnel Completion data. It will be available from 10th September on the dashboard. This report will help you understand the reasons for the drop-off in your funnel.