What are entity settings?

We have 4 main Advanced Settings options under entities.

What is Context from an IVA perspective?

Context is linguistically defined as the background in which the conversation is taking place. From the IVA perspective, it can involve retaining the memory of any piece of information that has been either derived from past user behavior, the action performed by the IVA or has been explicitly given by the user.

What is stored in the form of Context on an IVA?

When is the context information deleted?

The context is deleted by the system in case if any of the following events occur:

Where can you configure the previous_context_tag?

Why and when to use the previous_context_tag?

Is it mandatory to use it on every entity?

How to use a prev_context_tag?

How to configure previous_context_tag for multilingual bots?

In the case of multilingual bots, you should add previous_context_tags in all the languages that the bot is active for.

There is a step where we will be asking a user to provide primary & secondary mobile numbers, so here we will need 2 different entities with the same type and validation to store them separately. 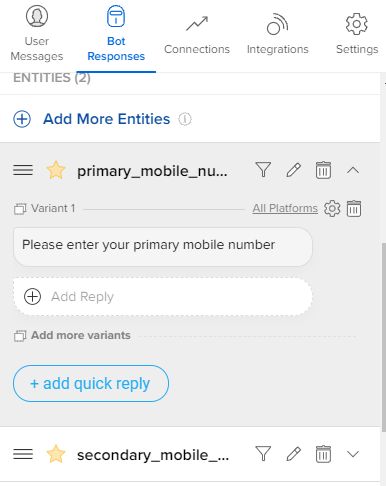 So here as you can see the unique word which differentiates both the entities is “primary” which we will use as prev_context_tag for the primary mobile number entity.

and “secondary” for secondary mobile number entity as shown below

Check the below image with debug logs on how the previous_context_tag works and stores the value in the respective entity. 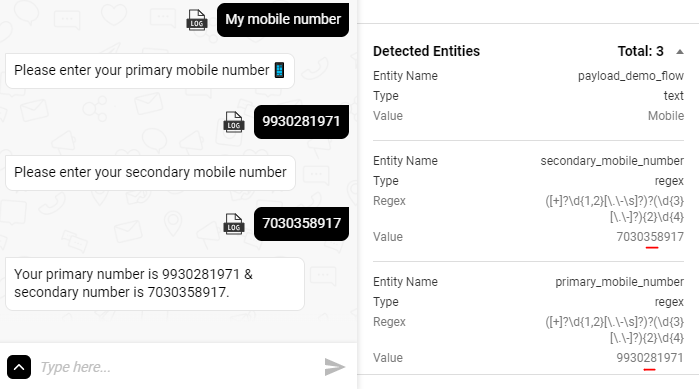 If you are updating the bot response, ensure the previous_context_tag is updated too. 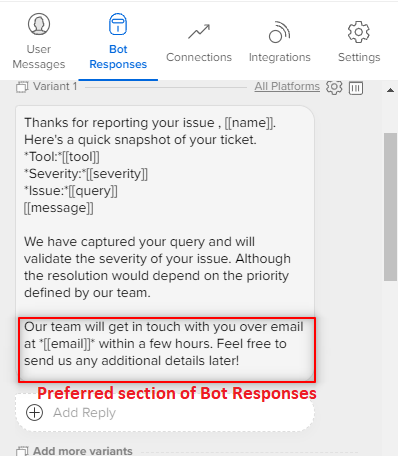 In the above image, as the bot response is a long message, a word/phrase from the last 500 characters should be added as the previous_context_tag to capture the corresponding entity.

Payload is the data that you want to send with a user text via button/Quick reply which is not visible to the user but can be stored in the entity and we can use this data in further flows wherever required.

Where can you use this?

You can use this function when you are showing the same user message for various options but want the selected option to be saved in the entity.

How does payload functionality work?

In a flow where we have multiple products to display with the same text, we will pass a unique value as a hidden message in the button using the payload, and whenever a user selects an option, the data is passed as a hidden message button gets stored in the entity. Once we have the payload value stored in the entity, we can use this entity to start a certain flow or if required we can use this entity value in future flows.

How to use the payload?

Implementation of the payload can be divided into 2 parts

Here is an example to understand this concept -

Let’s take a use case where we need to display multiple plans for Netflix with the same button text as Know more. So after the user selects any particular plan by clicking on the Know more button, it should land on that particular plan & start the flow.

So here we need to pass a unique value for every plan in the payload and store these values in an entity. After the user selects an option using Know more CTA, a payload will be passed with the entity value which will trigger the required flow using a connection of entity by value.

Why do we need an Entity here?

If we do not use an entity to store the value and distinguish the flow for the same Know more button, the bot will not understand which button was selected by the user and will trigger the wrong flow by treating it as a user message. So instead we pass a hidden message with a value that is stored in the entity that helps in transition or future flows.

As you can see after selecting the Mobile+ plan the entity value is Mobile plus which was passed in the payload - Know more {api_name:plan, planid:mobile plus}

Sample use cases for using payload -