How to edit user messages?

You can edit, flag, or deactivate the user messages added in the User Messages section of the step.

To understand the user's query bot supports spelling mistakes and tries to capture the correct intent using entities. There are two modules that help the bot to achieve this -

To account for the user’s mistakes, the Sentence Similarity module accounts for some spelling mistakes that a user could make. For example, if a user types “Show me services” or “Show me services”, they would still be matched to the “Show Services” step as per the above examples.

For this module to work, the bot developer should have entered the correct spelling variations at least once in user message.

With the feature entity tagging in user messages, bot builders no longer have to add similar variations in the user message with all the entity values mentioned in the entity dictionary.

Instead, they have to enter one user message variation with the entity value. The entities get tagged in the user message if they are added to the dictionary.

How does this work?

Entities are auto-tagged in the user message if the entity values are populated in the entity dictionary. 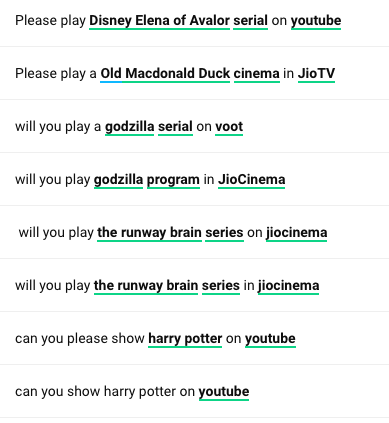 If you notice these utterances, the only difference is "Jio cinema" and “Hotstar” which can be added as values in the same entity.

To simplify and reduce the effort of generating such User Responses where a common set of words that belong to the same entity are needed, you can enable the entity feature on the bot.