What are the types of responses?

Depending on how the step is built, the Bot Responses section can have three types of responses - Bot Responses, Entity Response, Final Response.

This is the first message that the bot sends out when the step is detected and it doesn't know about any entity on the step. 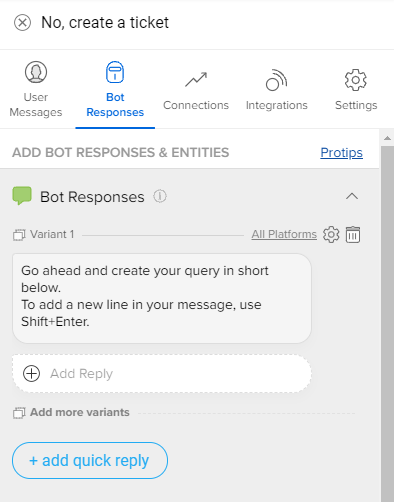 If you have Entities present on a step, then Entity Response is the response that the bot will send when it doesn't know that Entity's value.

Since Non-Mandatory entities are not compulsory for the step, you don’t need to add a specific response for this entity. And the request to collect the answer can be combined with responses for other Mandatory Entities by using Chat Forms or other HSLs.

Once all the entities have been collected, the bot finally replies with the responses from the Final Response section. This is usually the closing message for that step.

In cases where the step is a Start step or an intermediate step, the Final Response section is useful to send a response to continue the user to the next part of the flow.

Final Response isn't applicable if the step doesn't have any entities as the Bot Responses itself acts like the Final Response. 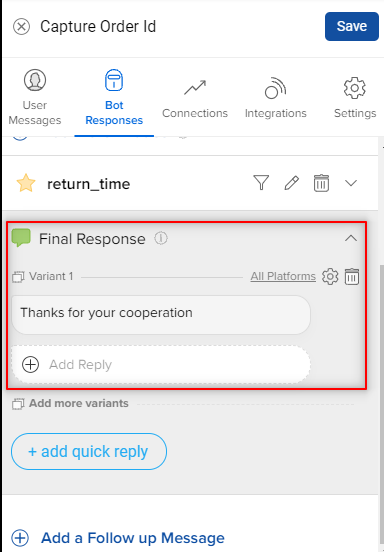 In case you want to skip this message and directly continue the user's journey in the flow, add {} as the Final Response. Click here to know more about Smart Actions on Bot Responses.

This is an interesting section under Bot Responses. Sometimes we need to follow up with users as they stop replying, you can achieve that by using Follow up message.

If the user is inactive for a specific interval, then the bot replies with the Follow Up message. The delay interval for this message can be set using the slider and can be set between 20 seconds to 20 minutes.

Use Follow Up messages to collect feedback or increase engagement on your bot. 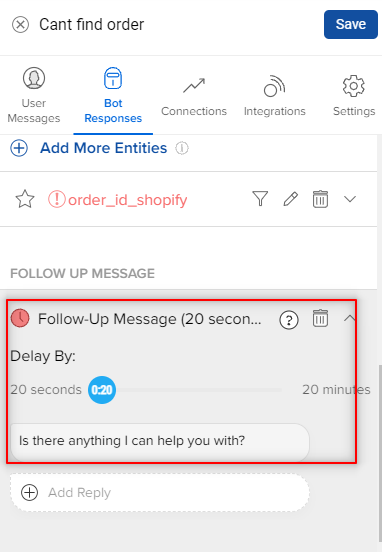 Follow up message will be sent only if the user has not replied back after reaching that step and the chat is in Bot state.