What is Bot Versioning? How does it work?

Bot Versioning, as the name suggests is basically a way to save different versions of the  Bot that you are building. Let us understand this whole feature in detail in this article.

What are versions of bots?

When you build a bot on Conversation Studio, you might want to save it at a certain point where you have added a few capabilities to your bot (kind of like a “Restore Point”). Once you have saved it, a version is created that you can access at any point in time, as shown. 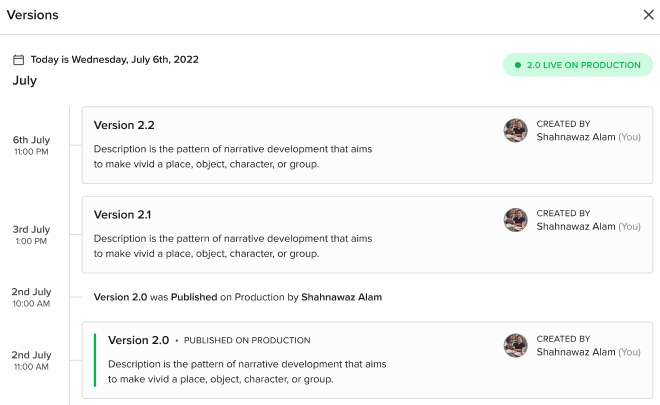 Now, the next time you make any changes to the bot, your previously saved version will be left untouched, and a new version will be created which you can save again at any given point.

For example, you have created a bot, and have added three Steps to it. After that, you saved the bot's version and named it Version 1. So, the next time you make any changes to your bot, Version 1 will not be touched, but rather a new version will be created. After you have made your edits, you can choose to save this version and name it Version 2. Thus now, you have two versions of a single bot, Version 1 and Version 2. If and when required, you can now switch your working bot to any of these Versions and continue working from that point

From here on, whenever you make any changes to your bot, your previously saved versions, Version 1 and Version 2 will be unaffected, and your bot will be on a new version which you can save once you are done with your changes.

As you saw, with Bot Versioning, you can save various checkpoints of your bot-building journey, and once you have saved them, you can restore your bot to any of those checkpoints at any point in time. This way, you always have an option to go back to an older, stabler version, if something goes wrong.

Can I edit a previous Version?

Not exactly. Say you have restored your bot to a previous version. Now, when you make an edit on this version,  the process repeats, and again a new version will be created. This way your previously saved version will stay intact, and whatever changes you have made will now be a part of a new Version. In this way, you can create as many versions as required.

Can I re-publish a previous Version?

Yes, you can. If you have restored your bot to a previous version, you can hit “Publish” and thereby publish it to Production again.

How does Bot Versioning work? How to create versions?

Navigate to your bot on Haptik, and you will see an option named Manage Versions in the Conversation Studio tool, as shown.

When you click on Manage Versions, you will see a screen that says No Version yet. This basically means that you have not created any Versions yet. 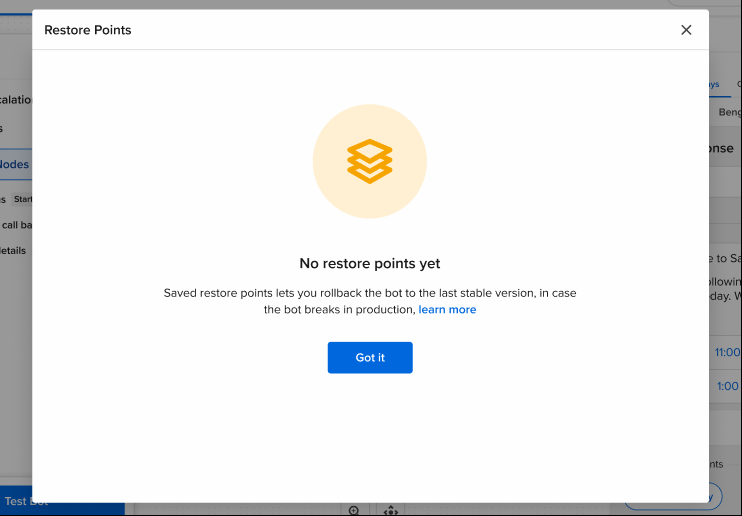 What you can do here is, make some edits to your bot and then click on Manage Versions, and when you come back to this popup, you will see a new section that says Current Working Copy, which means you have an unsaved version.

You can now simply click on Save as a Version button and save the version in the bot, as shown.

The Platform will automatically name your version, but you can click on the “pencil” icon to edit the version name. 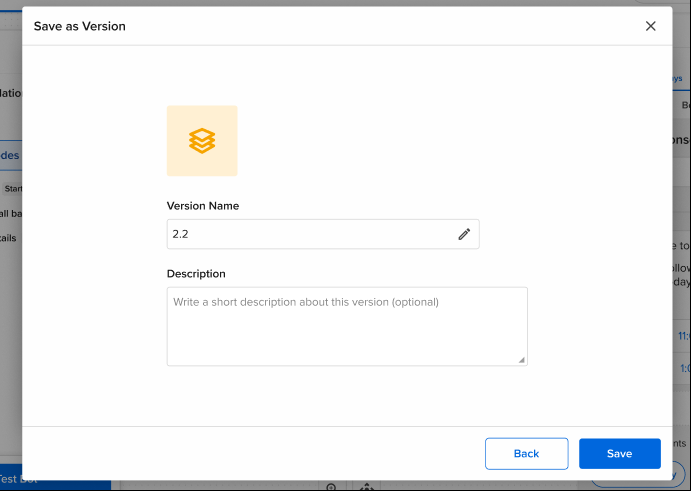 The Description is an optional field, but we strongly recommend you add a description for every version, so as to easily distinguish them from one another.

You will be asked for a final confirmation, before saving the Version, as shown. 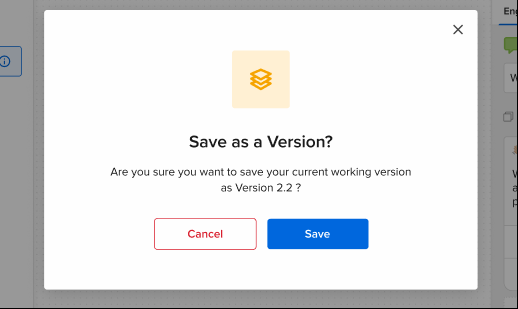 Once the version is saved, you can view it by clicking on the Manage Versions button, and you will see it in the pop-up window, as shown.

Now, as we have seen, if you make changes to your bot, a new copy of the bot(unsaved version) will be created and when you click on the Manage Versions button, you will be able to see a new working copy, as follows.

You can again save this new working copy after you have made necessary changes to it. Click on Save as a Version button, and follow the same steps that were followed above in order to save this version. Once this new version is saved, you will be able to see and access it by clicking on the Manage Versions button, as shown.

Similarly, you can save multiple versions of a single bot, to mark various bot building checkpoints, as shown. 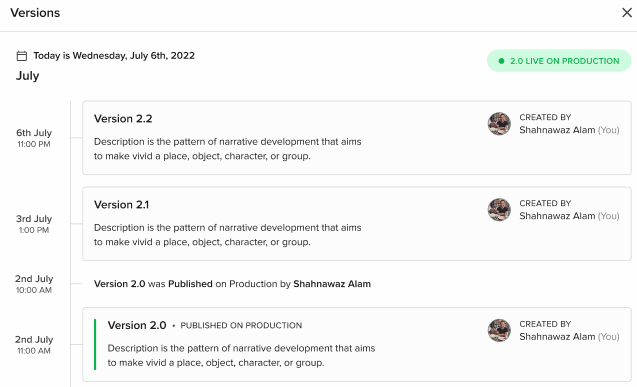 When a version is saved, it is saved by the name of the creator. Creator is anyone who has created that version, and saved it.

Apart from that, a bot getting published to Production Environment is also recorded along with the version that was published. 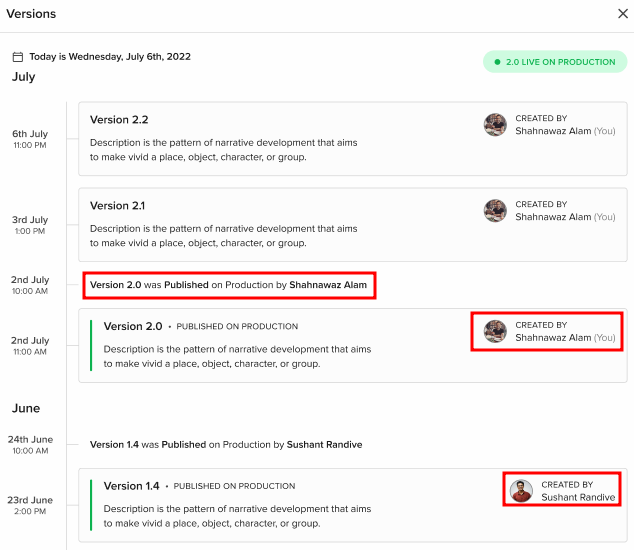 How to restore a previously saved Version?

In order to restore a previously saved Version, just navigate to Manage Versions, and hover on the Version that you wish to restore, as shown. You will see an option as Restore on Staging. Click on it. 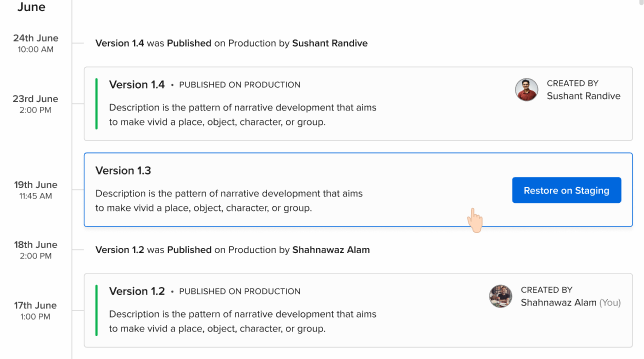 After clicking on Restore on Staging, it will ask for a final confirmation, as shown. 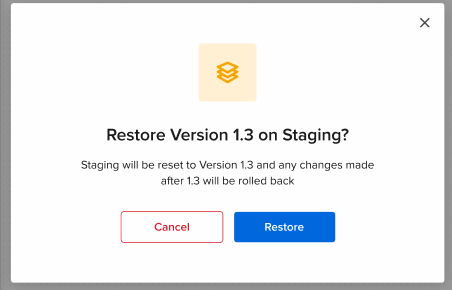 Once the version is restored, you can work on it and make changes to it as per your requirements. An entry stating that this particular version was restored on staging will be recorded on the Manage Versions window as shown in the below image.

Also, do note that the version which has been published to Production Environment will also be denoted in the Manage Versions window in a green capsule, as shown. 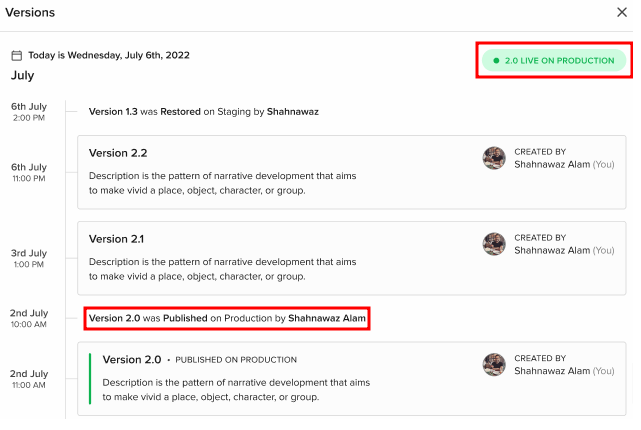 This is how Bot Versioning works, using which you can create versions of your bot, and work accordingly.