What is a Code Step?

The purpose of a Code Step is to take the input collected from the static and use custom code to perform business logic on it. The advantage of moving this to a separate step is that it helps you in separating out the code and non-code features of bot building.

The Code Step takes the input from the static step in a JSON format with certain parameters. It processes this input JSON according to business logic and returns an output JSON.

Additionally, this gives you more power with respect to what you can do with the output from the integration code as we will in the next section and the connections section. 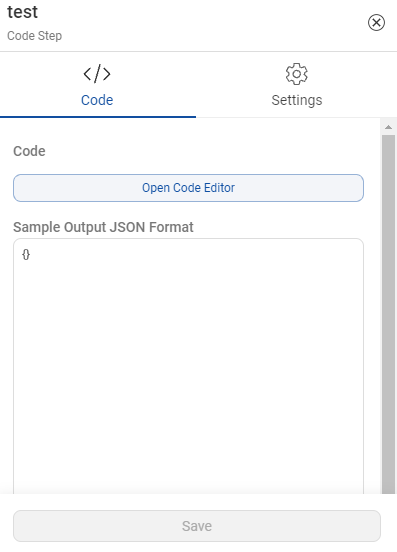 The Code Editor feature allows for a quick go-to-market and significantly reduces the infrastructure cost.

You can open the code editor by choosing a Code Step and then clicking on the Open Code Editor button.

The only requirement for using the Code Editor is, the code should follow the below format. The supported programming language is Python 3 and above. If any syntax errors or exceptions are raised by the main function, this will result in a Bot Break message.

How to use the Code Step?

The first step would be to add a Code Step in your bot. Once you have added a Code Step, you need to define its purpose and accordingly, you can edit the sample code inside the Code Editor.

On the Static Step, we collect information from the users, in the form of entities. It can be used on the Code Step to fetch user-related information from the backend/database. You can learn more about it here. Once the entity value is stored in a variable on the Code Step, you can use this variable to send these entity values to the API and fetch the real-time data. You can send this variable as a payload to the API endpoint.

You can also share data across Code Steps, using the conversation_details variable. You can use the user_details variable for storing the user's data locally. You can set environment variables for the code executor to store values like database username and passwords that you don't want to expose inside the code.

Other than the above functionalities related to the Code Step, you can also use logger support for debugging, use the final response in the main method, use an external package in the Code Step, and you can also create HSLs in a Code Step to create dynamic responses on the bot.

Once you have added the required functionalities to your code step in the code editor, it is time to execute it. You can learn more about executing the code here.

Variables used in the Code Step

We use three variables in the code step, namely -