The first section in the Intelligent Analytics tool is the Overview section. As the name suggests, this section helps you get a quick overview of the important metrics to measure the IVA's performance.

The Overview section provides information about:

You can know more about a section by clicking on the ? icon and -> icon will take you to their respective sections on the Intelligent Analytics tool.

On top of all screens inside the Intelligent Analytics tool you will find the business options. This option helps you select the business name from the dropdown for which you want to analyze the data.

The tool will identify your timezone to analyze the data.

On the right hand side of the filter section, you will find the duration filters. Using these settings you can filter the time period of the data presented.

There is a compare feature available which will help you to compare the performance of all metrics between the selected duration and its previous duration.

The first section in the overview section is the number of users who have conversed on the bot in the given duration period. On hovering over the number, you will be able to check the actual number of new users and the number of returning users i.e., repeat users.

What are unique users?

Unique Users refer to the number of unique individuals who have visited your bot over a period of time. As the name indicates, the number of visits per user does not affect this count.

Eg. If Mary visits the bot on Tuesday, Wednesday and Thursday, the unique user count will be displayed as 1. It does not increase by 3 as Mary is one ‘unique’ user.

What are New vs. Repeat users?

Eg. If Mary visits the bot on Tuesday for the first time, then comes on Wednesday again, the repeat user count will be displayed as 1.

CSAT Stands for Customer Satisfaction Score. This key performance indicator tracks how satisfied are the customers with the service.

How is CSAT Calculated?

CSAT Formula = Positive responses (4 and 5) / Total no. of response volume

There following colours are used to show the benchmarks of CSAT -

This section gives the average User Rating. The rating is optional and is given on a scale of 1-5 stars.

A conversation is defined as a series of messages exchanged between the IVA and the user before 8 minutes of inactivity.

In bot state, we close a conversation when there are no messages exchanged between the IVA and the user for 8 minutes.

In agent state, we close a conversation either only when the agent clicks “Close Chat” or after 8 mins inactivity for chats that are in “Waiting State”.

Automated system messages like "Chat Assigned", "Chat Completed", "Delay", "Follow Up" etc. are not to be included when calculating the conversation complete time.

This section gives first 5 funnels as per volume coming on the bot.

Funnel is a step or a series of steps designed to see the effectiveness of the bot to help user’s reach their goal.

Along with the funnel name, funnel hits and completion rate are also shown.

Funnel Hits: Defines the number of times a particular funnel has been hit by all the users on the bot.

Completion rate: Defines the number of instances where the user reached their end goal.

Below are the scenarios where bot breaks could possibly take place -

Scenario 1:When a bot fails to answer a query which it was trained on

When bot gives a smart assist message, it is not considered as a Bot Break. You can read more about Smart Assist and its types here.

As we do not count Smart Assist as a broken message. In case you want to access these messages, you can follow below steps

Bot Transfers are shown on the graph too with a vertical line along with a toggle filter to see the details with and without. Checking these lines on the graph will help us understand if there have been any changes in the bot's performance due to bot transfers.

Language Usage shows the split of languages, conversations and bot automation percentage for all the languages user are interacting in, on the IVA. This section helps in understanding capabilities that should be added to support end-users who reach out in different languages.

What does language(s) mean?

This section helps in understanding split of different languages your users are interacting in with the IVA.

If a user talks in a language which is not enabled on the bot, the bot will give a bot break and it will be tagged under default language English and automation number for English will be affected.

How are conversations calculated under Language Usage?

Conversations shows the split of languages in which the users are interacting with the IVA.

When you hover over the Conversation %, you can see the conversation count as shown below -

How is bot automation calculated under Language Usage?

The Conversation Split metrics will help you understand which conversations are being handed over to agents for live support. 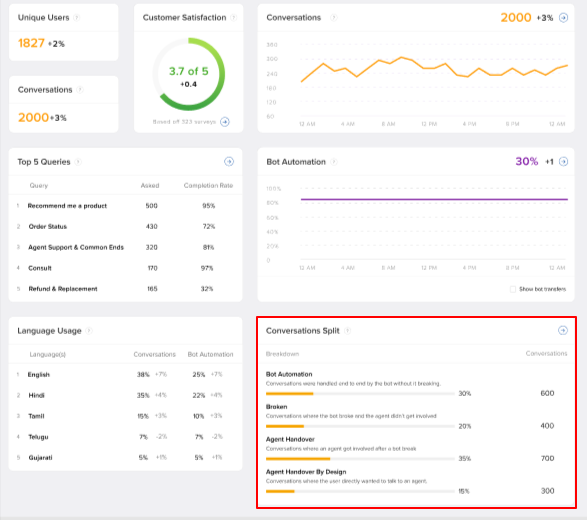 There are 4 different splits you can check in the Conversations Split section:

Arrow on the top right corner of this section will take you to Message Analysis' View Conversation section.