User Feedback is an asset

User feedback is very critical for any business. It tells you how your bot is performing, and it lets you know if the bot is functioning well or not, whether the bot is able to solve user's queries or not. It gives you an overview of every single aspect with respect to your bot. Though we have numbers on Intelligent Analytics like Bot Automation, Query Completion, Funnel Completion Rate, User Feedback comes directly from the user and is not an induced number thus a better way to make improvements in the bot.

Every new bot that is created on the Conversation Studio tool, will by default have this Feedback Skill in it, with the name Collecting User Feedback - CSAT.

CSAT is short for Customer Satisfaction, which is a commonly-used key performance indicator used to track how satisfied users are with your organization's products, in this case, bots. It shows the percentage of satisfied users.

CSAT is an important metric that lets you see what your end users are thinking about the bot.

This metric perfectly compliments the other metrics like “Bot Automation” and “Query Completion” because where these metrics showcase the performance of the bot’s NLU and the conversation flow designs, CSAT at the same time lets you know if the bot is actually helping the end-user or not. The union of these 3 ratings thus gives you a holistic idea of the bot’s actual performance.

CSAT is calculated by -

Here, the positive responses mean a total number of 4 and 5 ratings received.

The responses from the users are collected in the following way, as shown - 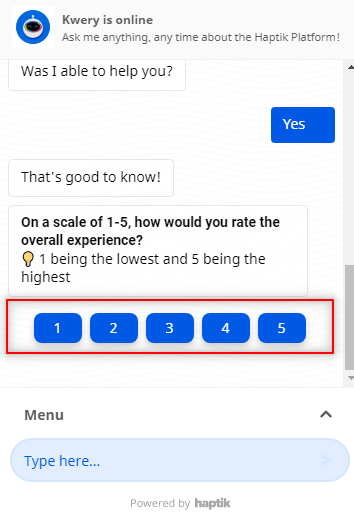 What is a good CSAT rating?

What are the benefits of Feedback collection?